From my perspective, the magic of Disney is that whenever I hear a certain song, or re-watch an old movie, it instantly takes me back. I’m reminded of the days when I would pop the chubby VHS tape in the VCR, decorated in some Cinderella costume my mom sewed, ornamented with orange juice stains and loose threads. Time stood still when I heard lovely tune of A Whole New World with Princess Jasmine’s grainy, enchanting presence on a TV screen that was once brand new in 1995.

Whew! Nostalgia, how bout it!

Disney’s animation was a unique, vibrant, breathtaking experience that I remember being inspired by as a child. The colors popped, the quick tricks were fascinating, the scenery was detailed, and everything was just so interesting.

Which is why I can’t help but share my disappointment in many of the new live-action Disney films, attempting to unnecessarily replicate these beautiful, original masterpieces. Why fix something that isn’t broken?

I’ve seen a handful of these new movies so far: Aladdin, Lion King, Cinderella, Beauty and the Beast, The Jungle Book. (Wow, actually typing these out I saw way more than I should’ve, damn.) Either way, I wasn’t impressed by them. Here’s why:

My big girl answer: The creators of these films banked on nostalgia, altered soundtracks, and big Hollywood names to recreate the tales. And, in a way, it worked. These movies racked in a massive fortune for Disney, and launched several careers for the ‘live-action’ actors. However, it failed in a more important way. Although the CGI that they love to use for everything is impeccable, the color palettes of (many) of the films are ridden with depressing, dull greys, browns, and blacks. The celebrity cameos are distracting and misplaced. The focus for these films is more on being ‘epic’ and gritty, showing off the calibrated CGI. Observing the overall look of the film from an art direction perspective, it’s underwhelming, especially seeing such phenomenal films like Coco being released in the same year. The difference is night and day.

My biased, toddler answer:  It took stories that were so vibrant, so beautiful, and so well-fitting for the animation they were currently told as, and made it a weird, stupid-looking human version! Are you kidding me? Part of the magic of Disney’s animation is that the characters are, in fact, animated, more vibrant than real people and real animals. You can twist and stretch the intensity of their looks and actions. It creates the larger-than-life, mind-boggling excitement that you can’t recreate yourself. The Lion King looked like a NATURE DOCUMENTARY. Their mouths barely moved, the colors were pathetic. You broke it! How’d you break the Lion King!? (Sidenote on Aladdin: I know Will Smith has a bajillion dollars but… I still don’t think the man got paid enough for being the genie Jesus fucking Christ)

Here’s a comparison between the Lion King animation (left) and live-action (right).

Here’s another, except vice versa:

This final comparison is from the Live Action Aladdin (2019) 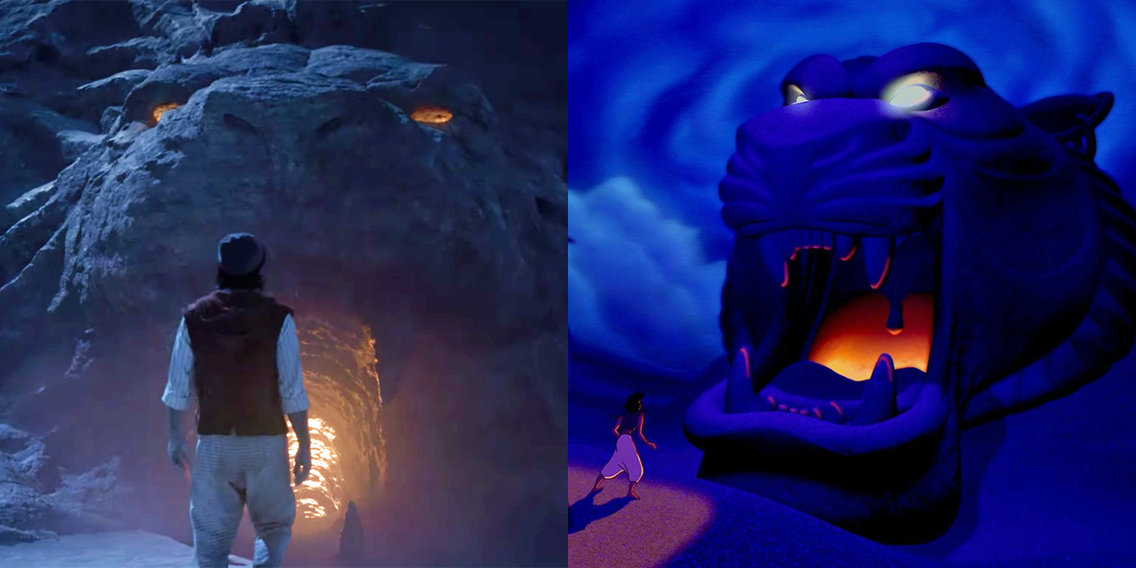 I understand the default answer: money. That little mouse will smile and wave and then slash each remaining industry dead as the serial entertainment monopolist. However, there are also less ‘capitalist’ reasons. Many people argued that these live-action films bring the same magic of the original stories to the new generation of children to enjoy. But to that I ask, is it the same magic?

Disney’s blatant disinterest in its own magic is, what can be best described as a plague affecting movie theaters everywhere. It’s almost aggravating, especially from where I’m standing. As a student who is interested in writing screenplays, it’s frustrating to watch Hollywood’s spotlight only shine on the same stories from roughly 15 years ago. I love seeing new creators, directors, and screenwriters explode. Watching quality, original work given the attention it deserves not only gives me something new to watch and enjoy, but also a gleam of hope for the future of content on the silver screen.

I’m not a fan of ‘10 reasons you shouldn’t support xyz’ or ‘why (insert movie or show) sucks!’ type of journalism. It isn’t very productive. However, I think it’s genuinely important to criticize a massive company that a wickedly tight grip on the entertainment industry’s balls. Disney has a large say over what we choose to accept as the standard for entertainment that we once held sacredly to our childhood hearts. I hope this phase of live-action movies is a weird fluke that we can all just kick under the magic carpet.